Here’s a little something that would help you know more about yourself. Pick one: ‘Circle’, ‘Triangle’, ‘Square’, or ‘Z’.

Need ambiance? Okay, if I give you this link…you’ve got to pause at the 2:09 mark (or right at the point when Keith asks the attendees to share the shape they picked to the person next to them)

(Oh yeah! I asked myself the same thing: ‘What the…pick a shape!? There’s no shape…!?’ — then suddenly…I got my choice.)

Got it now? Okay. 🙂 Press Play…and enjoy (I myself am just in the first five minutes — so in a way…I guess we’ll be watching together)

Now…there’s good news and bad news to each of the shapes. That’s okay though. 🙂

Though I will share my shape: I’m a Circle.

Let me know what you think (privately or publicly by commenting below) of the rest of the video!

“The difference between writers and everyone else? Writers remember what they were thinking about in the shower.”

I have no idea where I first heard this or where it came from, but it stuck. The Shower Thought, that moment of clarity where nothing else really exists in the world around you except the flow of hot water, steam filling the room and a clear mind. It’s in this moment, countless times, I’ve been lucky to experience an epiphany of creativity.

The hardest part is holding onto that memory, lest you lose a serendipitous opportunity to craft something new, and if you’re lucky, unique.

The trick is to not let those thoughts marinate too long, simmering in your brain instead of slicing, dicing and preparing them to share with the world. The easiest way? Write every day.

That habit has helped me not just become a better writer, but become more efficient in how I write. Inspiration can be so fleeting, it’s pivotal to get pen to paper or fingers to keyboard in order to hone your moment of clarity into something tangible.

Take, for instance, a recent post on my blog from a Friday in mid-February. All week, friends and I had been discussing the topic du jour in the Beer World – an inflammatory article about how one person decided craft beer was dead to them because a style they didn’t like has become popular. There was a lot of huffing and hawing about the usefulness of such a clickbaity piece, so it was stuck in my head.

Then, on Friday morning, as I got ready for work, I let my mind wander to all the weird places a companion post might go … Could I write about craft beer being “alive” like a person? Could I take apart the author’s argument piece-by-piece? No – I’ll take the post for face value and think about why *I* would want to write something like that.

I kept that thought flowing, never letting it leave the forefront of my mind. I scribbled some notes on paper and as soon as I sat at a computer, I started typing and didn’t stop.

In all, I probably spent about 60 minutes working on the piece, but it was that initial spurt of imagination that got me started. Because I let my mind drift in the shower.

This is not to say a shower is the only place to find revelatory thoughts. Exercise is a great distraction for the body that I’ve found lets my mind wander, too. The important part is to not let those thoughts drift too much, otherwise instead of being a writer, you’ll just be “everyone else,” letting your shot at creativity float away like the steam in your bathroom.

Bryan Roth is a freelance writer and the man behind ‘This Is Why I’m Drunk’. Follow his random thoughts on Twitter at @bryandroth and his pursuit of “beertography” on Instagram at @bryandroth.

It never fails to make me smile when I get these little (pleasant) surprises life brings. One example (that may end up as a favourite!) is how I learned something new about Twitter by noticing Ryan Reynolds‘ profile.

Last week I was looking through the tweets of a fellow Twitter user (who decided to give me a follow recently) and 13 tweets down (I found the tweets interesting..like this!)

then did a double take (I may have said: ‘whoa!’ out loud) when I got to this:

I took time looking at it, and then attempted to make sense of it. My first thought was: “Why would Twitter suggest someone to follow me…and Ryan Reynolds — what’s the link!?”

Then after a minute…it made sense…when I noticed that we were followed close to each other (I did a test to find out who went first and now know that Ryan was followed first, then me)

Now I know another additional way my Twitter gets exposure (resulting in me getting to connect with more cool people!) other than just the ‘recommended for you’ section (left hand side when you are on your profile — or right before the tweets of someone you had just followed).

Did you know that instead of requesting others not to re-blog your content, you can just turn the functionality off?

A while back, I remember a couple of ‘About Me’ sections of blogs requesting not to re-blog their content. Now I’m not sure why they keep that functionality on still (unless they didn’t know that it can be turned off).

I guess from a Twitter user’s perspective, reblogging is similar to retweeting:

That is why I didn’t mind the concept (though I don’t think my content has been reblogged before).

Though I do understand those who choose not to have their content show up on another site (maybe because it is likely that the person who came across a post that has been reblogged, might not visit the site where the content originated from?).

Anyway! Let me stop myself, so I can guide you through the steps required to turn off the reblogging option on your site:

That’s it! 🙂 Hope that lessened your worries today (that someone would share your content without your permission)!

With all the talk of the importance of taking care of your health (proactively rather than reactively), I was reminded earlier of one of the reasons why so few keep at it.

And since our brains most times act like 2 year olds (not usually into long term thinking), schedules are usually ignored and goals are shelved.

No…no…no. I’m not going to give you a bunch of things to do to evaluate yourself…or scare you into thinking that if you don’t act now…you literally are losing money.

I’m going to ask you what your health goal is for this week? What’s the one thing that you’d like to improve on? sleep? meals (less sugar intake)?

Some reading that may help you find yours:

Me? Well…I’m going for sleep.

Yep…another reason I’m typing now…and not in dreamland…is I stuffed up my sleeping schedule (it happens on days when I get sucked into either learning something new I can apply, or getting a burst of creative energy…and not hitting the breaks in time.). And with me and sleep, it is not just as simple as blaring through a podcast and drifting off — I actually have to be consistent (give or take an hour).

As I mentioned in my previous entry, I’d be making a guide to take you through improving the quality of the audio you’ve recorded. This helps if you want to eliminate background noise or want to level out certain parts of the audio.

After you’ve opened the audio file you wanted to clean up:

* If you are wanting to clean up the audio that came with the video you’ve taken, you can also use audacity to capture it. Once Audacity is open, just select stereo mix as your source — then hit record. 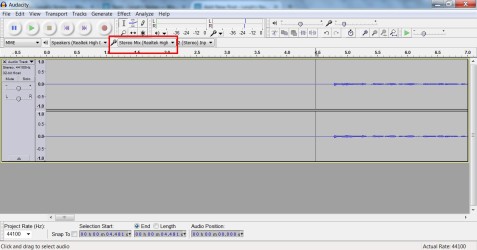 Looking for a way to mix your audio with your video? check out my previous entry.

Don’t discount the capabilities of the video editor that comes with Windows! The one I used as an example is from Windows 7.

Whether you’d like to sync external audio or would like to add music to your video — here is a quick how-to. 🙂

Happy editing! 🙂 Let me know if your video is up on YouTube so I can check it out!

Next entry, I’d like to give a quick tutorial to clean up an audio file using Audacity. This helps if you want to eliminate background noise or want to level out certain parts of the audio.